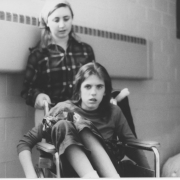 Preventing the abuse and neglect of vulnerable members of our communities was the focus of both my personal and professional struggles during the first nine months of 2019. As I was finishing Forget They Were Ever Born, a memoir about my sister’s institutionalization as a toddler and years of abuse, I was asked to facilitate a Task Force convened by Arizona Governor Doug Ducey. Both were daunting tasks.

The memoir was the culmination of two decades of reflection, drafts, and re-writes. Several times I stepped away, only to come back even more convinced that we must remember our collective past. We must remember why the institutionalization of people with intellectual and developmental disabilities is a bad idea — bad for the quality of life of people who are not neurotypical, bad for their families, and bad for our communities. And we need to remember that without a circle of support, families can suffer greatly when caring for a loved one with special needs.

And the Task Force was the most difficult engagement of my consulting career. The Governor convened the group in response to the rape of an incapacitated young woman in an intermediate care facility and the subsequent unanticipated birth of her baby. Horrified, incredulous voices circled the globe as national and international media picked up the story. How could such a thing happen? How can such appalling abuse and neglect be prevented?

The charge to the Task Force was to supplement the changes underway in state agencies with additional recommendations. The Task Force and five workgroups were comprised of self-advocates, family members, advocacy organizations, tribal representatives, providers, foundations and public charities, state agency leaders and staff, and members of the Arizona legislature.

Seventy-five people participated in a consensus-building process that included sharing experiences and information, research on best practices, and literature searches. Meetings were open to the public, with call-in options for those not able to attend in person.

The breadth and depth of perspectives represented on the Task Force was a strength in developing robust recommendations, but also made it difficult, at times, to reach consensus. For the most part, the group worked through differences and found compromises that addressed concerns and still left room for meaningful change. As the process came to a close, one of the most contentious points was whether or not to mention Hacienda HealthCare.

A majority of Task Force members approved the following statement and said it conveyed an essential message, but it was not included in the published report:

The impetus for considering enhanced protections was the rape of an incapacitated woman in the care of Hacienda HealthCare in Phoenix, Arizona, and her subsequent unnoticed pregnancy and unanticipated delivery. The Task Force did not play an investigative role regarding the events at Hacienda. Rather, its discussions were informed by concerns raised by the Hacienda case and Task Force members’ knowledge and experiences with services, supports, and protections for vulnerable individuals in Arizona and elsewhere in the country. Task Force recognizes the serious harm that was inflicted on a vulnerable individual in the care of Hacienda HealthCare and acknowledges that its recommendations cannot mitigate the anguish and suffering endured by this young woman and her family.

Preventing anguish and suffering is a responsibility we bear as a society and as caring people. The issue is complex, and solutions are not straightforward. People with intellectual and developmental disabilities need wraparound coordination of comprehensive services. They need safe homes. Their well-being requires that they be welcomed and integrated into our communities. And they need strong legal and educational protections against neglect and abuse.

We must elect officials who will develop, fund, and enact public policies and legislation to stop the abuse that my sister suffered for four decades, the abuse suffered by the young woman at Hacienda HealthCare, and the abuse that continues throughout our country today.

The Abuse & Neglect Task Force report is available at https://azahcccs.gov/AHCCCS/Downloads/AbuseAndNeglectPreventionTaskForceReport2019.pdf

Search this site for…